The three-year AHRC-funded Bass Culture project is finished now, and there’s a brand new website where you can find details of over 200 fiddle books and 22 fully digitized and indexed collections.

If you’d like to contact the project, you’ll find a link on the hms.scot website homepage.  (Comments on this blog may go to researchers no longer connected with the project, so it’s better to contact hms.scot!)

OK, it’s still in beta and there are some wrinkles to be ironed out, but we hope you like it! There are 22 fiddle books complete, and the details of about 200 more, compiled by Karen McAulay and me over a year and a half visiting libraries.

Special thanks to our webmaster Luca Guariento who has gone well beyond the call of duty slaving over a hot laptop, to make a vast amount of data into something comprehensible and, we hope, fun to explore. If you see him, buy him a beer or give him a job (depending on your resources).

Get in there and let us know what we can improve – we’ll do the official launch early next year.

In the late 18th and early 19th, paratext in Scottish song and dance collections quite often object to “Italian” influences in music.  There’s the perception that “Italian” is synonymous with fussy, arty, classical music and not quite what the compilers expected in a Scottish music anthology. Things were different in earlier days.  Here’s Francis Barsanti (Francesco) circa 1742, in A Collection of Old Scots Tunes, With the Bass for Violoncello or harpsichord. Set and most humbly Dedicated to the Right Honourable The Lady Erskine.  (Sadly, his successors would probably have dismissed it as just another Italianate, Baroque collection!)

Having discovered, in several ancient Scots tunes, an elegance and variety of harmony equal to the compositions of the most celebrated masters of those times; at the desire of several gentlemen of taste, I applied myself to do justice to those ancient compositions, by a proper and natural bass to each tune, with the strictest regard to the tune itself, and without any alteration of the tune to accommodate it to the bass.  As I flatter myself that this attempt to revive the taste of our ancestors will not be disagreeable, I have submitted the same to the judgment of the Publick, that in case this should have the good fortune to please, I may be encouraged to further attempts of the same kind.

Karen had two speaking engagements last weekend – one, a brief talk about our Bass Culture research project, and the other about the Wighton and Jimmy Shand music collections at Dundee Central Library.  (We looked at the Shand acquisition on one of our visits to Dundee last year.)

At the University of Glasgow, the audience was a group of Royal Conservatoire of Scotland students.  They will be experimenting with performing some of Robert Burns’s songs in the Scots Musical Museum and George Thomson’s more upmarket collections, as part of a big project in the Scottish Literature department at the University.  Karen’s talk about the Bass Culture project sat alongside talks about singing tutors and contemporary costume design, to provide context for the Burns project.

Shared from the Royal Conservatoire of Scotland’s Whittaker Live blog:-

Time Travel with a Tablet? Musick for Allan Ramsay’s Collection

With some excitement, yesterday, we opened this digital copy of one of Scotland’s earliest song-tune collections.  Allan Ramsay compiled a collection of song texts. Alexander Stuart compiled a tune-book to go with the words, in the mid-1720s. And here’s the digitized work, all the way from the University of South Carolina!

You can save the whole book to an iPad or tablet, and play the tunes out of it. What could be cooler than that?

Part of the G. Ross Roy Collection of Burnsiana and Scottish Literature) Musick for Allan Ramsay’s collection of 71 Scots songs

The Bass Culture team has adopted a serious, studious demeanour as the project rolls towards its October web-launch. Not that we weren’t serious and studious before, but we’re even more so now, which goes some way to explaining why there are fewer blogposts these days.

David and Karen are editing the spreadsheet (consistency is our middle name, and qualitative judgements are very carefully weighed up, if they’re allowed to remain at all!).  Luca is building the website.

It’s all the extra things that Karen’s afraid of forgetting!  There is going to be a bibliography of key sources: the following are some of them, but we’ll provide the full bibliographic details on the website itself!

All the information is there in Karen’s Mendeley and Diigo accounts, but it still needs to be collated and double, treble-checked!

Hold onto your hats, folks – it’s going to be quite a ride!

Here in Glasgow we’ve had a visit from Andrew Hankinson of the SIMSSA project at McGill University in Montréal. He’s been helping us implement search functionality and MEI into our web resource, which will live at www.hms.scot. So Luca and he were coding away behind me for days here in the bass culture office. In fact, it was difficult to get them to stop. On Friday night while we ate dinner, Andrew’s computer was running a script to convert to MEI nearly 2000 Sibelius files of tune incipits that had been carefully transcribed by Karens Marshalsay & McAulay, and this was the scene even outside the pub on Saturday night … 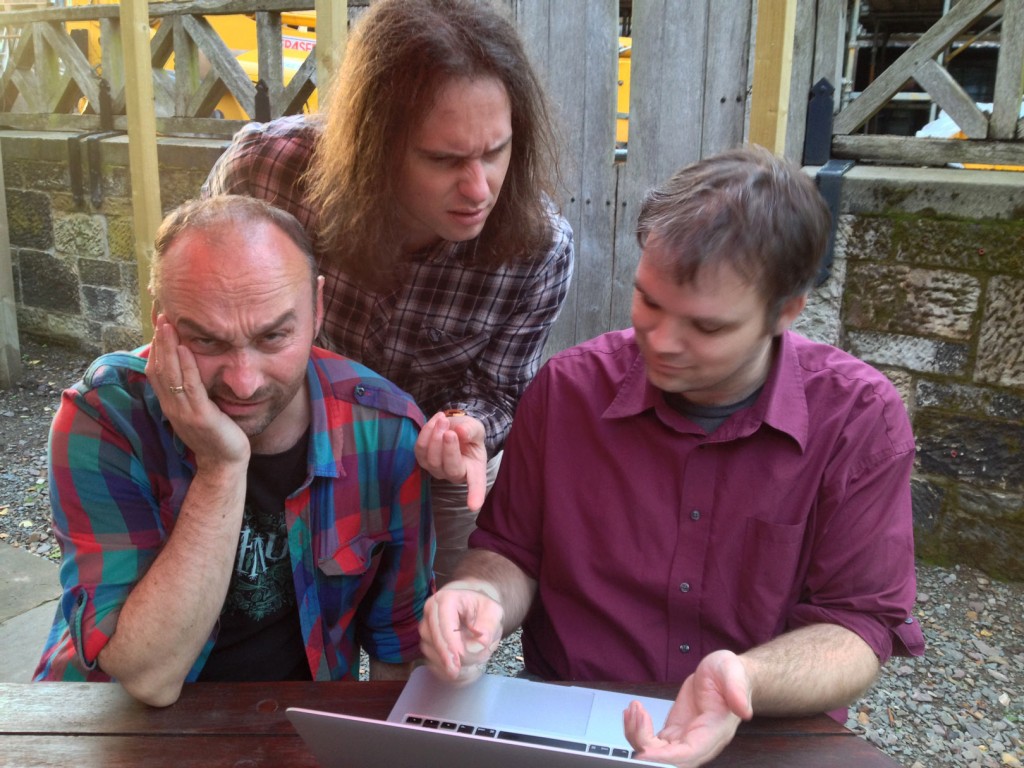 Here is a sneak preview of our website’s logo, as designed by Ewan MacPherson. 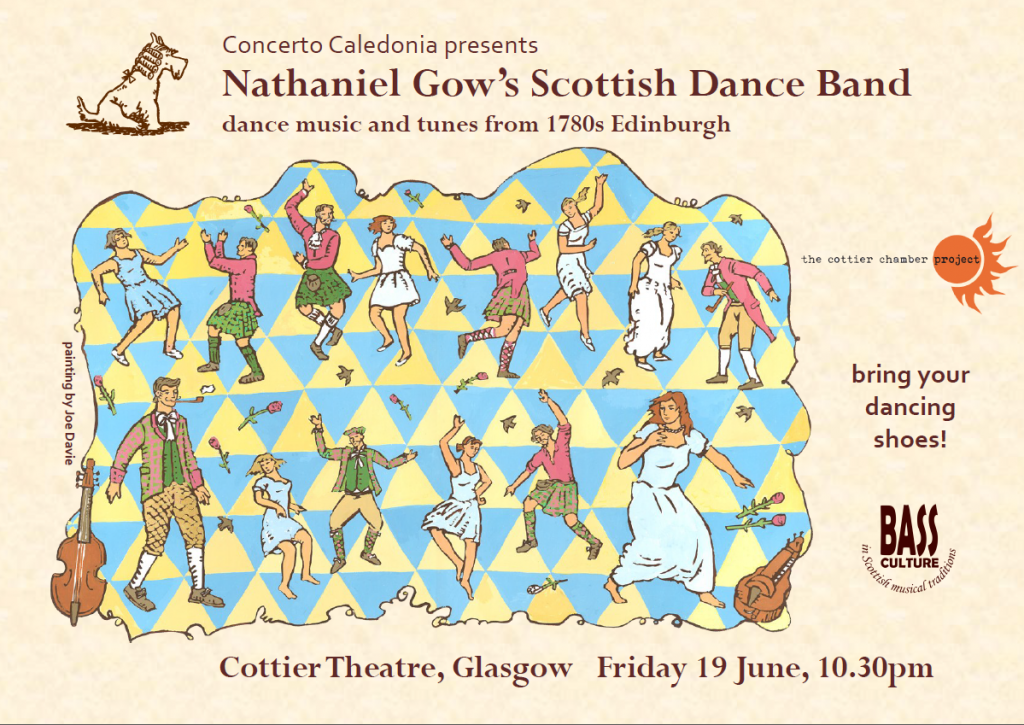 Curious about the quadrilles that David and Talitha have been working on, we decided to see what exactly Nathaniel Gow had been up to.  His first set of Favorite French Quadrilles looked interesting, so maybe there were more to discover …

More? There were dozens of collections compiled after 1815, and not just by Nathaniel Gow!  (Look in Copac.ac.uk, if you’ve got a few minutes to spare.)

The end of the Napoleonic Wars in 1815, after the Battle of Waterloo on18th June, led to a surge of enthusiasm for French dances in Britain.  In London, S. Chappell, James Paine and Edward Payne seem to have kicked off the trend, closely followed by John Gow.  John published six ‘favorite’ sets of quadrilles, ca.1818-23.  They all contained ‘Scotch airs’, as did his ‘First set of favorite Scotch quadrilles’ (1823), and two sets of ‘Caledonian quadrilles’ (published in London by Leoni Lee ca 1844).

This tells us that John and Nathaniel were keen to seize an opportunity, and kept abreast of trends in social dancing.  There’s probably a bigger story to tell here, but this will do for a start!  (Incidentally, Karen says Copac is an excellent place to derive material for book history stories.  All that data, just waiting to be interpreted imaginatively… ).

(And not an HMS Pinafore in sight!)

David McGuinness’s Concerto Caledonia will be playing for a day of Quadrilles and Contredanses in Edinburgh this Saturday, as Talitha Mackenzie leads a Regency Dance workshop.  Never was a band better informed than this one!  Since they may be drawing upon Bass Culture repertoire, it seems appropriate to post details of the event here.  So … do you know your Quadrilles from your Contredanses?

All welcome! Low-heeled shoes or dance pumps recommended ~ Regency dress suggested but not required for the ball.