The three-year AHRC-funded Bass Culture project is finished now, and there’s a brand new website where you can find details of over 200 fiddle books and 22 fully digitized and indexed collections.

If you’d like to contact the project, you’ll find a link on the hms.scot website homepage.  (Comments on this blog may go to researchers no longer connected with the project, so it’s better to contact hms.scot!)

Peter Thompson was a London publisher whose family business continued in St Paul’s Church Yard for a number of decades in the latter part of the eighteenth century. Around 1790, his sons Charles, Samuel and Peter, and Ann – his very elderly widow or a daughter in law – published two tunebooks, the Caledonian Muse and the Hibernian Muse – but never apparently did a Cambrian one. (A shame, in my opinion, but it’s a bit late to moan about that now!)

Nonetheless, I discovered they published Thirty Favourite Scots Songs in two volumes, as much as a decade before the Muses appeared. A Thompsons catalogue listed Scots Songs, circa 1781; and for a while I wondered if these books were actually published by the Thompsons, or were just Bremner’s Thirty Scots Songs, included in the Thompson’s listing because they were selling copies of the Scotsman’s works. However, there are still a couple of copies of Thompson’s Thirty Favourite Scots Songs extant, so I went to see the set at the British Library in London, armed with a print-out from the Eighteenth Century Collections Online of Bremner’s more famous collection for comparison. 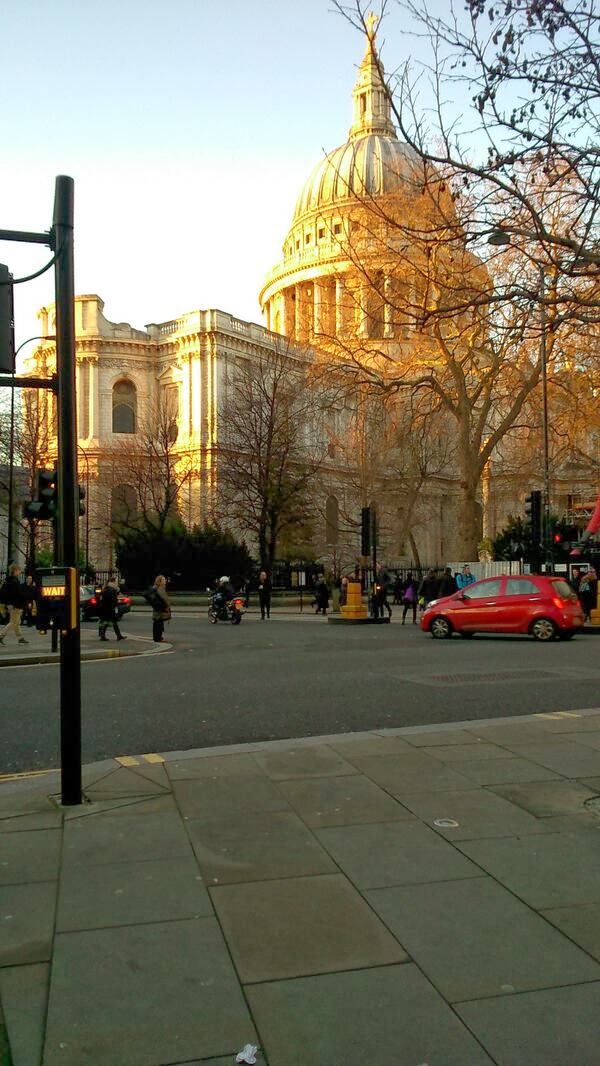 Why call a train a “sleeper”, if you don’t get a good night’s sleep in it? Something of a misnomer in my opinion!  Still, I arrived in time to head for St Paul’s Churchyard for my breakfast – St Paul’s looked gorgeous at daybreak and then clothed in golden sunlight – probably better than the view enjoyed by the Thompsons, for James Raven (p.55, ‘Constructing Bookscapes’, in Mappa Mundi,ed. Jacqueline Murray, 2001) reports that in 1785, as William West looked back from Blackfriar’s Bridge, he ‘could only just perceive St Paul’s with its dome towering amid the smoke and fog that surrounded it’.  The Churchyard was nice, too, but completely different to how it would have looked then, since the Blitz totally obliterated the buildings around St Paul’s.  And as for Cheapside – if you’d brought the Thompsons by Tardis into the early 21st century, and dropped them off with their backs to St Paul’s, then I doubt they’d have known where they were at all!  I had a bacon roll in Starbucks, looking appreciatively at St Paul’s, then made my way back to St. Pancras.

Once in the Music and Rare Books reading room, I looked at a set of English, Irish, ‘Scotch’ and ‘Welch’ piano duets, copying out a few incipits for future reference. And then I devoured those Scots songs. But there was something interesting about them – lots of songs were about “Jockey”, or were described as “Scotch” – two clear indications that these were pseudo-Scottish songs written for an English market. Furthermore more, many of them were ‘as sung’ by popular named performers in eighteenth century pleasure gardens – primarily Vauxhall Gardens*, or Ranelagh in Chelsea. The nineteenth century William Chappell called such repertoire ‘Anglo-Scottish’ – a fair description. There weren’t many songs in common with the Scotsman Bremner’s collection, and only a small handful had been borrowed in their entirety from Bremner, in the same key or slightly transposed. Often there was a separate part printed at the bottom of the page for ‘German Flute’ or ‘Guittar’, in a transposition that would allow the tune to sit better under the hands of the instrumentalist.

At the very foot of the page, some of the songs had the intials of the family partners at the time when individual songs would have been published. With the aid of two trusty music bibliographies by Frank Kidson, and later William C. Smith with Charles Humphries,I established that the whole collection, dated as approximately 1790 by the British Library, couldn’t possibly have been compiled before the latest partners’ dates – circa 1779. This does suggest that the catalogue circa 1781 most likely was alluding to the Thompsons’ Thirty Favourite Scots Songs, and not to Bremner’s set, although it would take a bit more detailed detective work to see if I could establish a later date for any of the Thompson’s Thirty Favourite contents.

Suddenly, four and half hours had vanished. My new ghostly London friends accompanied me down to the British Library Georgians exhibition. I swear the Thompsons, Robert Bremner and James Hook stood and had a good look at the material relating to popular dance and its musical accompaniment!

There’s a newish book (2011) about Vauxhall Gardens by David E Coke and Alan Borg, which I rather fancy reading. In a sense it’s a bit off-topic for someone studying Scottish fiddle tune accompaniments – and yet, at the same time, it’s about one of the most important places where middle- and upper-class Londoners would have sought their entertainment, for music, dancing and sheer spectacle. But when I returned to Glasgow, I remembered something else which is a truly bizarre coincidence.

We lived in North Shields on Tyneside, for a couple of years. My husband was the organist at Christ Church Parish Church. On odd Sunday nights, I deputised for him there. We can thus both claim the rather rare distinction of having played the instrument that Georg Frideric Handel once played – because the basis of the Christ Church organ is none other than the one from … Vauxhall Gardens! It was brought to Tyneside around 1820.

Don’t you think the ghosts of the Thompsons, and John Walsh, the publisher of much of Handel’s operatic material, would at least have treated me to a coffee in St Paul’s Coffee House if they’d known that?

I have tracked down my prey!  Perhaps I should explain my sense of triumph. When David, Barnaby and I were discussing terminology the other day, we talked about “taste” and “tasto”, but I mentioned that I had also encountered ‘tang’ as a way of describing the Scottish fiddling style. I knew I’d read about it in a piece of writing from the early 20th century. I knew it was written in connection with Scottish fiddlers, in the plural, rather than about one single fiddler. But could I remember where I’d read it? Apart from the fact that I’d found it by Googling for something else!

I have spent several hours since then, trying to find it again. My web history wasn’t helpful. Neither was my recollection of my researches into an Irish poet who was fascinated with Scottish poetry, particularly by Robert Burns.

Finally, finally, I have found it! William Honeyman’s ‘Strathspey Players’ was written in 1922. Yes, it referred to an authentic ‘tang’.  We certainly do need to be aware of this article, as a historical piece of writing if nothing else.  You can read it here.

But the word – I can now say authoritatively – is not solely applied to strathspey playing! Scottish whisky is often said to have a salty tang. There’s also a seaweed called Tang – it comes in yellow and blue! An interesting word, then, but perhaps not particularly useful to us!  And now I can stop banging my head against a brick wall …