Principal Investigator
David McGuinness is a musician and Senior Lecturer in Music at the University of Glasgow. He directs the ensemble Concerto Caledonia and as a keyboard player specialising in historical instruments, collaborates with musicians working in early and traditional music, and occasionally produces music for television drama.

Co-Investigator
John Butt has been Gardiner Professor of Music at the University of Glasgow since 2001 and pursues a dual career as performer and scholar. His published work is mainly on 17th and 18th century music, performance practice and issues of modernity and music, and he also works as a conductor and organist/harpsichordist, particularly as musical director of the Dunedin Consort.

Co-Investigator
Susan Rankin is Professor of Medieval Music at the University of Cambridge. She works mainly on music of the early middle ages, both monophonic and polyphonic, and is especially concerned with the status of notations in relation to musical practice, and with procedures for making music where notations reflect rather than determine practice.

Researcher
Karen McAulay is Music and Academic Services Librarian at the Royal Conservatoire of Scotland (formerly RSAMD), and is a Fellow of the Chartered Institute of Library and Information Professionals. She gained her PhD in Music from the University of Glasgow in 2009, on Scottish song collecting c.1760-1888, and has a book, Our Ancient National Airs: Scottish Song Collecting from the Enlightenment to the Romantic Era, was published by Ashgate in 2013. She is a church organist and choir director.

PhD Student
Barnaby Brown has been investigating pibroch as a performer since 1995. He began reviving the northern triplepipe in 2003 and works in a variety of intercultural, traditional and early music ensembles as a composer-performer. His publications concern Scotland’s harp and piping traditions and he lectured at the Royal Conservatoire of Scotland for six years before moving to Cambridge to begin full-time PhD research in 2012.

Systems Developer (initial phase)
Neil McDermott is Resource Development Officer for Music at the University of Glasgow.   In addition to supporting research and teaching in Music and Digital Humanities at Glasgow he is active as a recording engineer and performing musician. 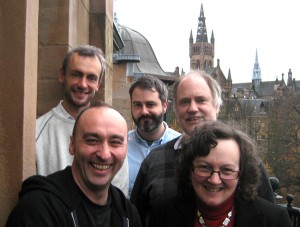